Common sense is a punishment

We promised you misadventures and this post is one. I have had a good run with Tinder, especially in the past 3 weeks – so it’s no surprise that two matches that sent me racist and inappropriate comments. I’ve also noticed a lot more people are using it, so as it’s popularity grows, there will be some idiots out there who use it. Expectation…. RESET!

My friend and I were walking back from a nice evening out on Sydney harbour and dinner with friends when I checked my phone and discovered this message.

Classy! Who wouldn’t want to meet this guy?! My friend took my phone and replied to him  basically telling him to get a grip of himself. His reply was even worse. I didn’t received it until the next morning and it was such an unpleasant thing to read in that I blocked him right away. I would have loved to yell at him, but I don’t think it would do any good. If anything, it would be exactly what he wanted: a reaction. Looking back, I wished I had reported him before I blocked him. Oh well, lesson learned… I now know where the report button is!

This morning, I received another winning one liner: “YOLO, c*ntz”. Unfortunately, I didn’t take a picture (my friend took the above picture and I asked her to send it to me to post). Fortunately, now that I know where the report button is, I reported him then deleted jerk-face 2.0.

I thought it was common sense to be polite to people, but it’s NOT. Common sense is a misleading term, because truth be told, it’s actually very RARE! If anything, it’s a punishment. Grumpy cat, I agree with you! 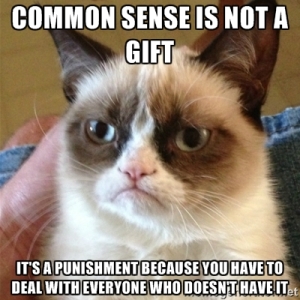 So, what winning lines have you received on Tinder? Share them with us!

This post has nothing to do with Tinder. So if you’re obsessed with it and don’t care about any other topics, I suggest you stop reading. Please don’t! I still want you to read! I promise this story will be just as entertaining as any Tinder meeting, if not more entertaining.

It starts as most stories about a crazy guy do– at a bar. It was the long weekend. My friends and I decided to grab a few drinks and sat at a sweet table on the balcony. We had an amazing view of the park where couples were awkwardly kissing (and where I had a previous Tinder kiss) and of a gelato store where we would later eat tiramisu and rum raisin flavoured gelato…mmm…I digress. I was on my third shot of tequila, my friends on their 3rd or 4th glass of vodka soda or some equivalent. The room was full of cute men. All was right in my world.

And then he appeared. A seemingly harmless guy who I thought was just going to deliver some cheesy pick up line and then disappear when it was not well received. I was wrong. His first sentences were whether we were all friends and if we hung out in the city much. Innocent enough, right? We all awkwardly laughed and avoided eye contact. I shifted further towards my friend’s boyfriend (I guess looking for some sort of manly protection). We brushed it off, but he persisted. “Do you live around here?” “I don’t have many friends and would like to go to dinner with you guys.” “I go there all the time, we should meet up there tomorrow, give me your number”. At this point I sort of felt sorry for him. He seemed socially awkward and desperate. He directed most of his attention to my friend with the boyfriend. She’s got double D’s. That probably has nothing at all to do with it. But, on the off chance it does, I can’t say I blame him– I already stare at them and I’m a girl.  He hilariously assumed that when she said that she and her boyfriend were having a family dinner with his mum that they were related. Her boyfriend’s take? “We’re dating, I guess.” They’ve been together 6 months, seeing each other for 8 or 9. Said the three big words. He would later say he was trying to play “cool”, I suppose in front of his new, not-hitting-on-his-girlfriend, friend. My friend promised she would have her revenge later that night. I’m hoping it involved whips.

Once he found out she was taken and after she gave him her REAL number (remember peeps, if he’s a creep, don’t give it or change a few digits), he looked at me and said, “‘if I would have known, I would have gone for you instead”. Classy. I’m your second choice?!?! REALLY?!?!?! Way to flatter a girl, dude. Even the creeps have no game. He then asked me what I did for a living and where I lived. My answers were as vague as possible and he kept pressuring me for an exact location of my house. I fumbled my way through a passable response and he moved on to what I’m sure he considered a more interesting topic: “I had a girlfriend who was Italian and she told me she used to get sensations (you can guess where) when she was on a swing or riding a bike”. …………………

I don’t often get speechless or lack witty responses. But, all I could pathetically mumble was “I’m not going to discuss this with a stranger.” No “I’m getting a pervert sensation right now” or “you’re not going to feel any sensations when I’m done with you”. I am supremely disappointed in myself. But, the strange thing was that while we all felt uncomfortable, no one told him to piss off, though my other friend was turning a bright shade of fuchsia in an attempt to restrain her aggression and slap-ready hands. I personally was strangely intrigued by what was going to come out of his mouth next. I was also wondering whether he’d be the type of creep that would call you incessantly and give you gifts. I wouldn’t mind the latter. Unless they were crappy gifts. Or strange ones. Luckily (or not) for us, he said he had to go back to his highly elusive friends. If you can even call them friends (assuming they exist). Real make-believe friends don’t let other friends harass girls in bars without at least buying them a round of drinks. That’s just common sense.

Lessons from this: If I have children, make sure they are properly schooled on dating/bar/general etiquette and common sense at an early age. And that they don’t have make-believe friends past age 15.